Looking for a place to have your Washington DC Engagement session?! Why not the first date location, where he popped the question, or better yet the place where he first asked you out!

Fogo de Chão on Pennsylvania Ave. NW, in the heart of Washington, DC, is a very special spot for Melissa & Justin. A love story is always best told by the two lovers! Since Melissa and Justin when I first met them at Caribou Coffee reminded me of “When Harry Met Sally” I begged them to both tell their story to me in depth!

Here it is! Enjoy a local “When Harry Met Sally” love story from Melissa then Justin’s perspective:

MELISSA:
“After graduating from Millersville University, I took some time to find a career I wanted to pursue and was eventually hired by a surgical supply company as an “on site” at Lancaster General Hospital in Pennsylvania. The hospital ended my contract early and I spent a few months working in their Sterile Processing Department. It didn’t take me long to realize that I needed to do something slightly different and landed a job with my current company. The job took me to Walter Reed National Naval Medical Center in Bethesda, MD where I would meet my future husband.

When I arrived at my new job site, one of the first people I met was Justin. At the time, I was dating someone from PA who I eventually broke up with shortly after moving. (Side note: Neither of these two events were related.) Finally,in March of 2012, I decided to become more social and went out with some people from work for a friend’s birthday. We celebrated at Fogo de Chao in Washington, D.C. Justin was sitting two seats down and that’s when I REALLY noticed him. He was wearing a very nice blue dress shirt which brought out his blue eyes. I was able to make conversation with him at the salad bar, and then again at the end of dinner. By the end of the evening, Justin had asked me out for our first date on the following Tuesday.

December rolled around and things were going very well. We were home to see my family for the holidays and had a trip planned to NYC for the night. Once we got into New York, we had pizza, walked around, then checked into our hotel. We went to dinner at The Sea Grill in Rockefellar Center and Justin was very quiet. We walked outside after dinner to admire the tree and the lights. It was starting to rain when I asked Justin if he was ready to go. He said, “Just a minute,” and kept looking at the tree. I asked him a few minutes later if he was ready. Once again, Justin said, “Just a minute.” A lady selling flowers then approached us, put two pink roses in my hands, and said, “Every lady needs roses at the holidays.” Justin paid the lady, then pulled out a box from his pocket. He said, ” I’m ready,” and opened the box revealing a beautiful ring. Tears began to fall immediately and when he asked me to marry him I said yes! A few people cheered and clapped, noticing what just happened. We went back to the hotel and there were a dozen red roses and a bottle of champagne waiting for us. It was surely a memorable evening in Rockefellar Center and I certainly can’t wait to marry my best friend!”

“After graduating from the University of Wisconsin-Madison, I took a few years off to of course “find” myself. I enlisted in the United States Navy and was stationed at National Naval Medical Center in 2008. In August 2011, NNMC and Walter Reed Army Medical Center merged into Walter Reed National Military Medical Center. This merger is what brought my soon to be wife to me. I first met Melissa when I was the departments training officer. I remember meeting her and saying, “nice to meet you”. I also remember thinking that she was very attractive. However, I was very busy at the time with the merger and didn’t really give her the time of day; at least that is what she remembers. We worked together for about 7 months with only the occasional “hello” and “How was your weekend?” It was then nearing the end of March and we were all going out to Fogo De Chao for a mutual friend’s birthday.

A couple of us got to dinner after people were already sat, I noticed her at the end of the table. We found ourselves next to each other in the buffet line and sparked up a few words of conversation. As the dinner ended one of my friends said to me, “You know, I think Melissa is in to you”. I said, “You think so?” Looking back now, I remember thinking more about her as this dinner approached. It seemed that in the weeks prior to the dinner everything was setting up for us to get together. After dinner, we went to the bowling alley where I talked a little more with her, and even bought her first drink. As that winded down, we all planned on going to my place to end the night. All the other women had gone their separate ways but as we got to the car I was hoping that she would take a chance and come over. Luckily she did!

Back at my place, there were about 7 of us. I was waiting for the seat next to Melissa on the couch to open up. As soon as it did I pounced into the seat. We started talking and soon found ourselves all alone. By the end of the night we had our first date planned and that would lead to countless more and a proposal in New York City.

Come November, we were of course planning our first holiday together. We spent Thanksgiving with my family. I had to introduce her to my brothers and their family before anything else could happen. My whole family seemed to know what I was thinking and planning. Weeks before, I started planning an overnight trip to New York. Melissa absolutely loves the city and wanted to go see all the lights. I made the plans and began thinking that that would be a perfect opportunity to propose. I had snuck out of work one day to pick up a ring. Now I just had to plan out the moment, and of course ask her Dad for her hand in marriage.

We made our way up to her parents house in Allentown, PA for Christmas. The next day, Melissa was in the shower and I had my chance to ask him. He was sitting on the floor, icing his foot; so it was not the most opportune time but I had to hurry before I heard the water shut off. I thought for a second, “Now how do I start this question”. In the end, I think I ended up saying, “Well, I’m not sure how to do this but I would like to ask your permission for Melissa’s hand in marriage.” He immediately rose and shook my hand and said, “Welcome to the family”. Now it was on to New York and the next step.

Melissa’s wanted to see the lights, the Rockefeller Center Tree, and go ice skating. I thought I could accomplish all this at once, and the proposal. My plan was to take her skating and then propose on the ice while skating. We arrived in the city and had some pizza. I got a reservation at The Sea Grill which looks right out onto the ice at Rockefeller Center. As we left the hotel, I told her to wait a minute and ran back towards the elevator. I actually went to the front desk and passed a note that said a dozen red roses and bottle of champagne. The manager said he would do his best to have it done by 8:30. I said that I was proposing tonight and then he told me to give him until 9:00 and that now he felt obligated to make it happen. I had the ring in my pocket, burning a hole in my pocket. The nerves were starting to get to me. I’m sure I seemed distant since I was quite distracted. I was running through every scenario in my head thinking, “OK, How am I going to do this”. I ditched my skating plan, which turned out to be a great idea once I saw how well she could skate. We finished a wonderful dinner and began making our way up to look at the tree. We walked outside and it has just begun to drizzle. We looked at the tree, all the time I was thinking about how this was going to happen. She kept saying, “OK, I’m ready. I replied, “No, just a little longer”. Then out of nowhere, an older lady approached us and put a pink rose into her hand saying, “All ladies need a rose on the holidays”. I thought to myself, “OK, this is the sign”. I paid her and she walked away. I mumbled low, “OK, I’m ready”. I took out the ring and got down on one knee and asked, “Melissa, will you marry me?” The tears had already begun falling down her cheeks at the sight of the ring. She said yes and I came up and placed the ring on her finger. We hugged and kissed to a few congratulations and some whooping from nearby people.

We strolled along the streets, euphoric from the proposal, calling family and friends with the news. We made it back to the hotel room where the roses sat in a beautiful vase with the champagne next to them. We drank a little, called a few more family and friends, and fell asleep in each other’s arms. We have now just passed our first year anniversary and had our engagement pictures taken on March 24th. We have most of the planning completed for a May 2014 wedding. I feel so lucky and now have been able to toss out any past regrets since all my choices led me to this point and to this wonderful woman. I cannot wait to continue our journey. ”

There is nothing better then the inner thoughts of the man right before and during his proposal story! Thank you Melissa & Justin for sharing you sweet love story with all of us romantics!! 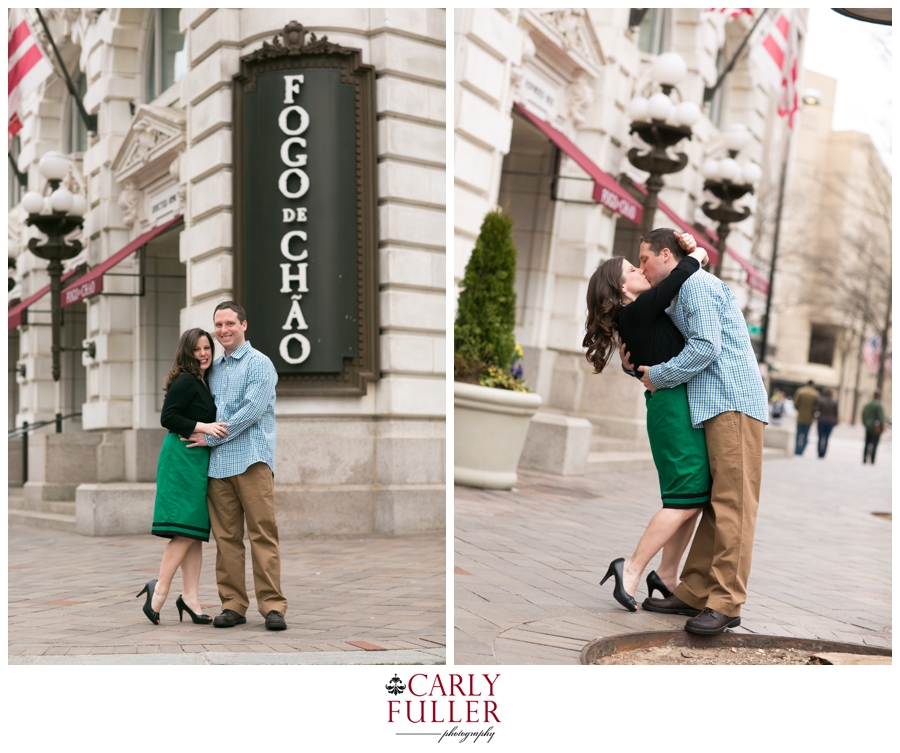 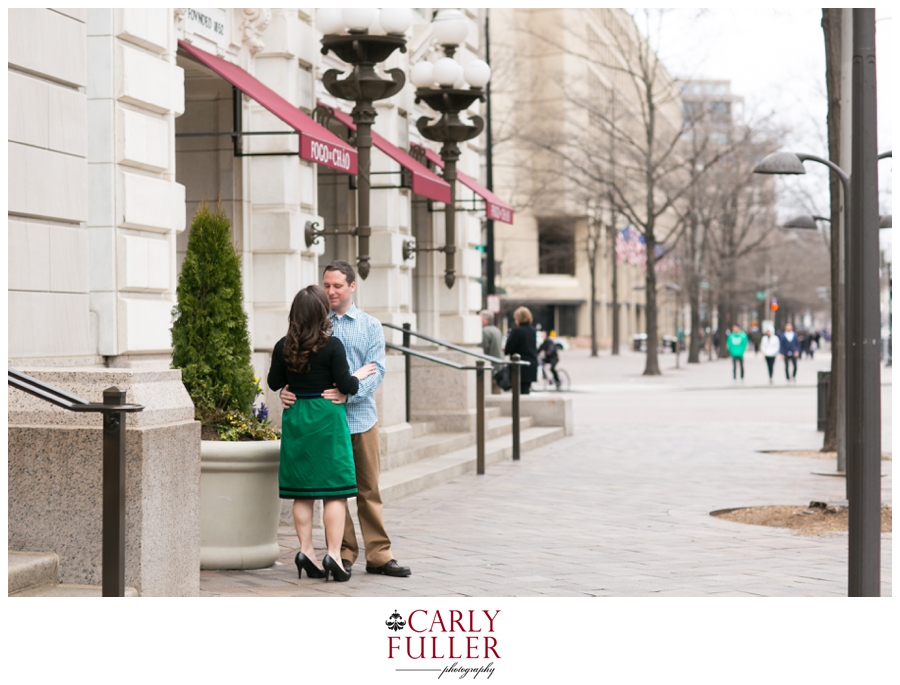 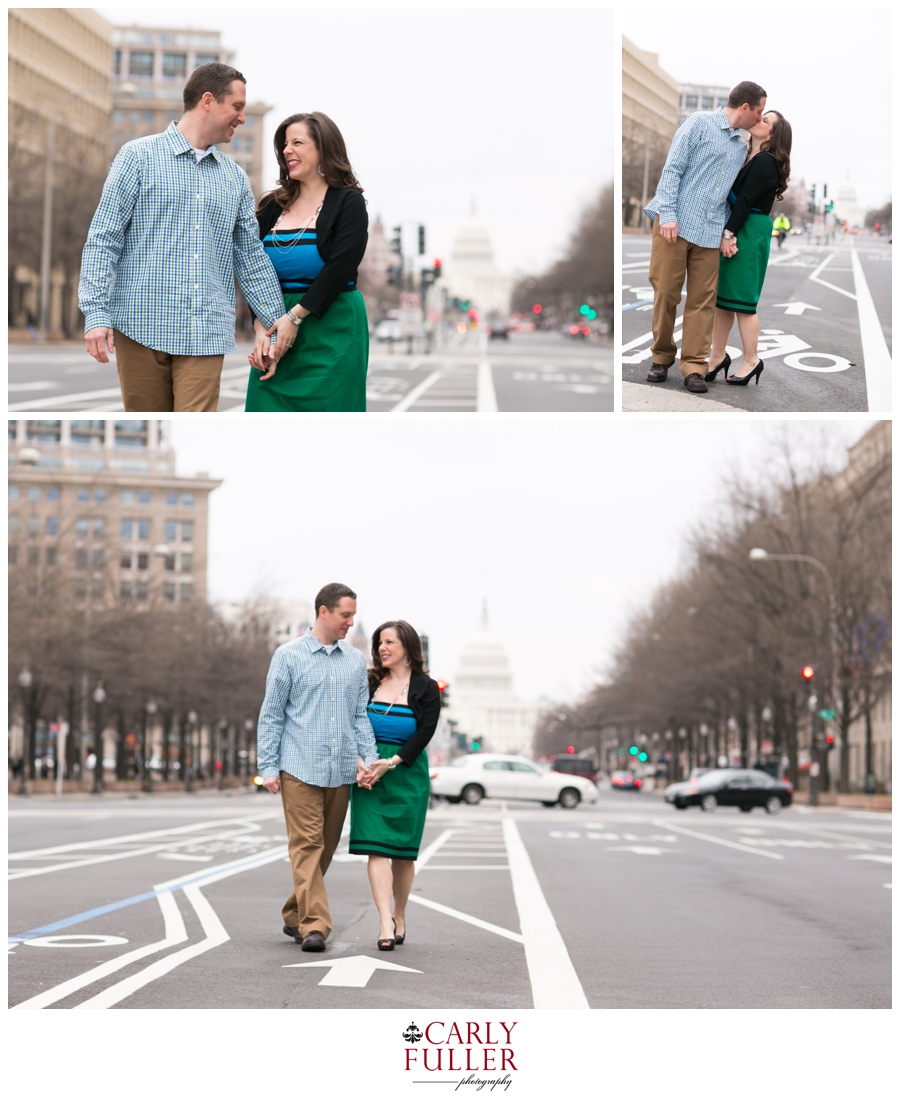 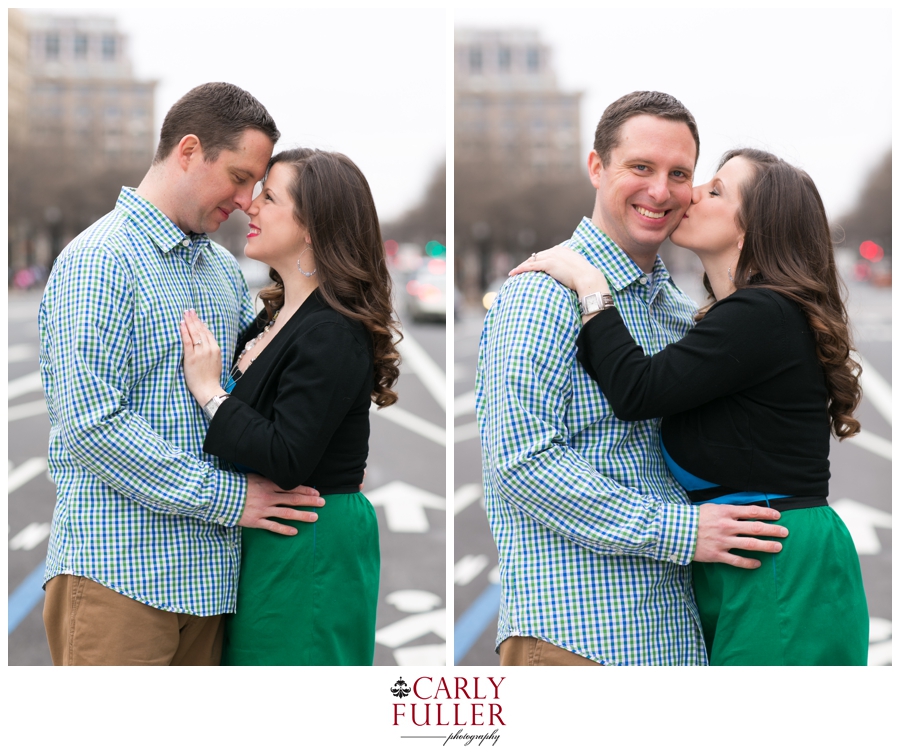 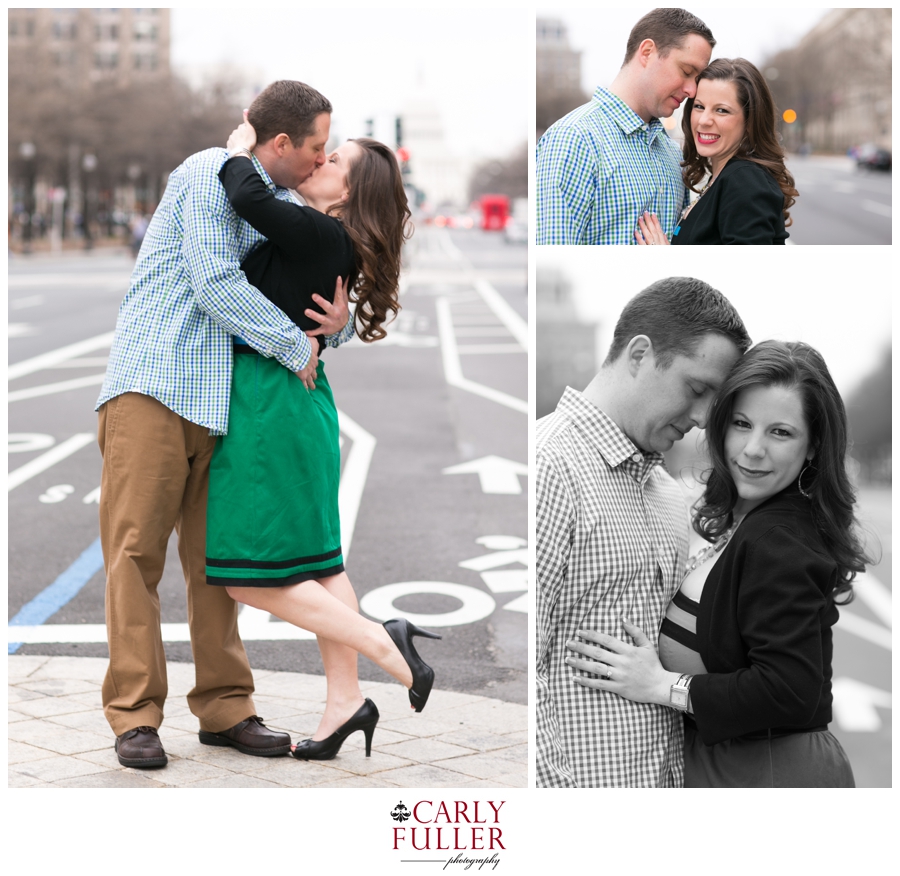 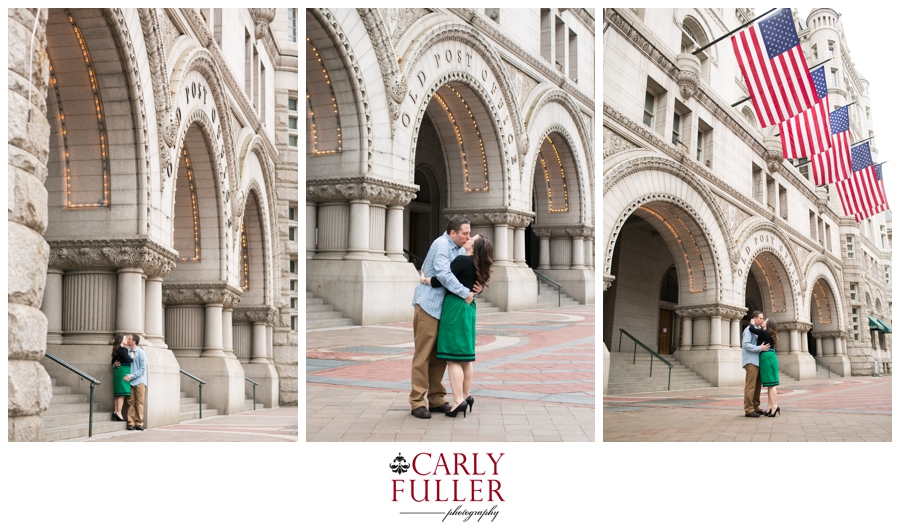 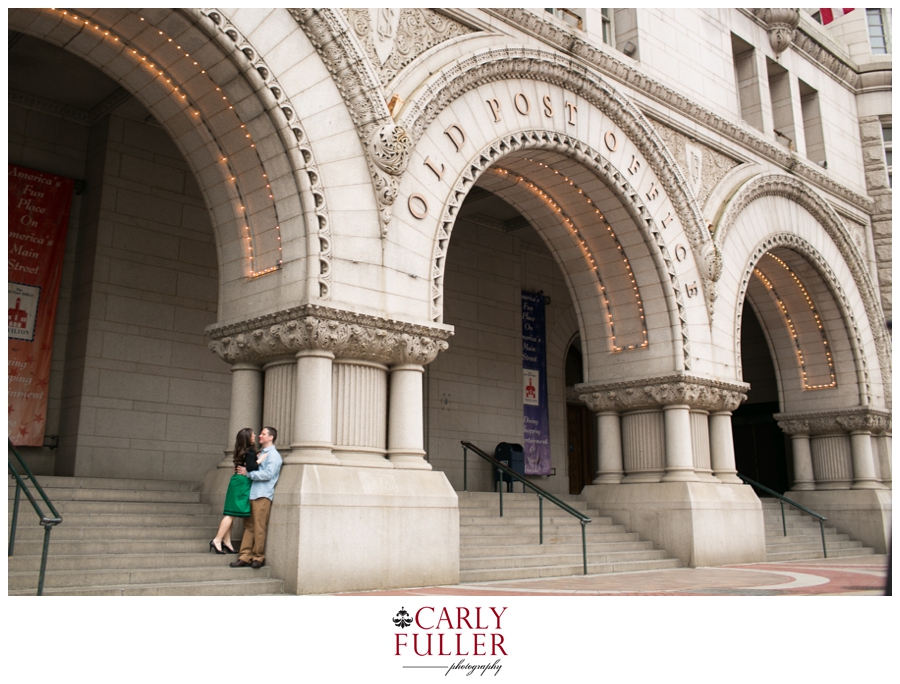 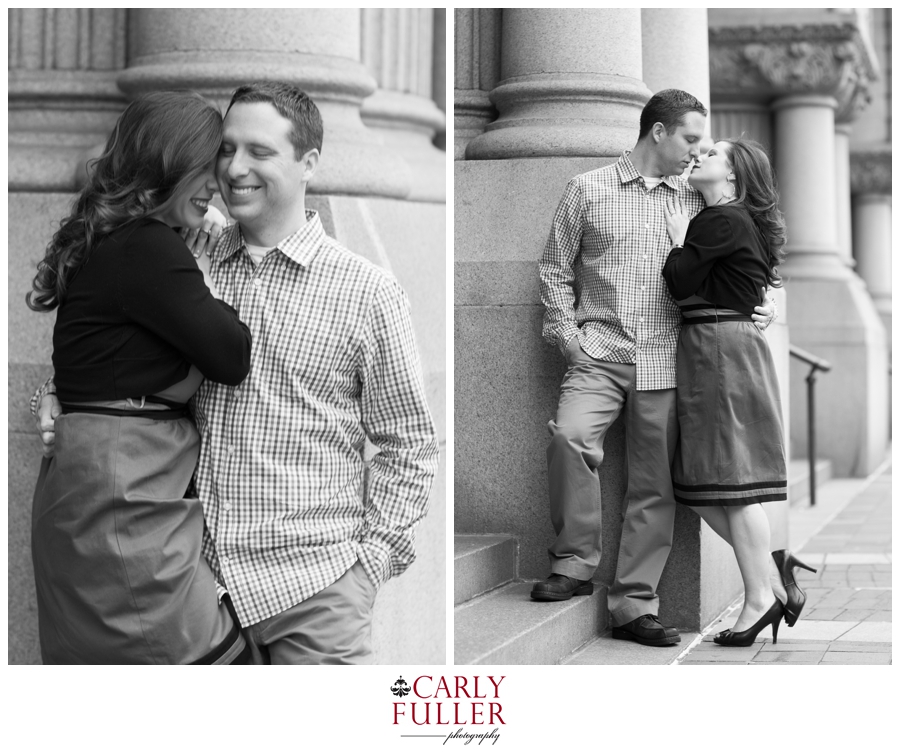 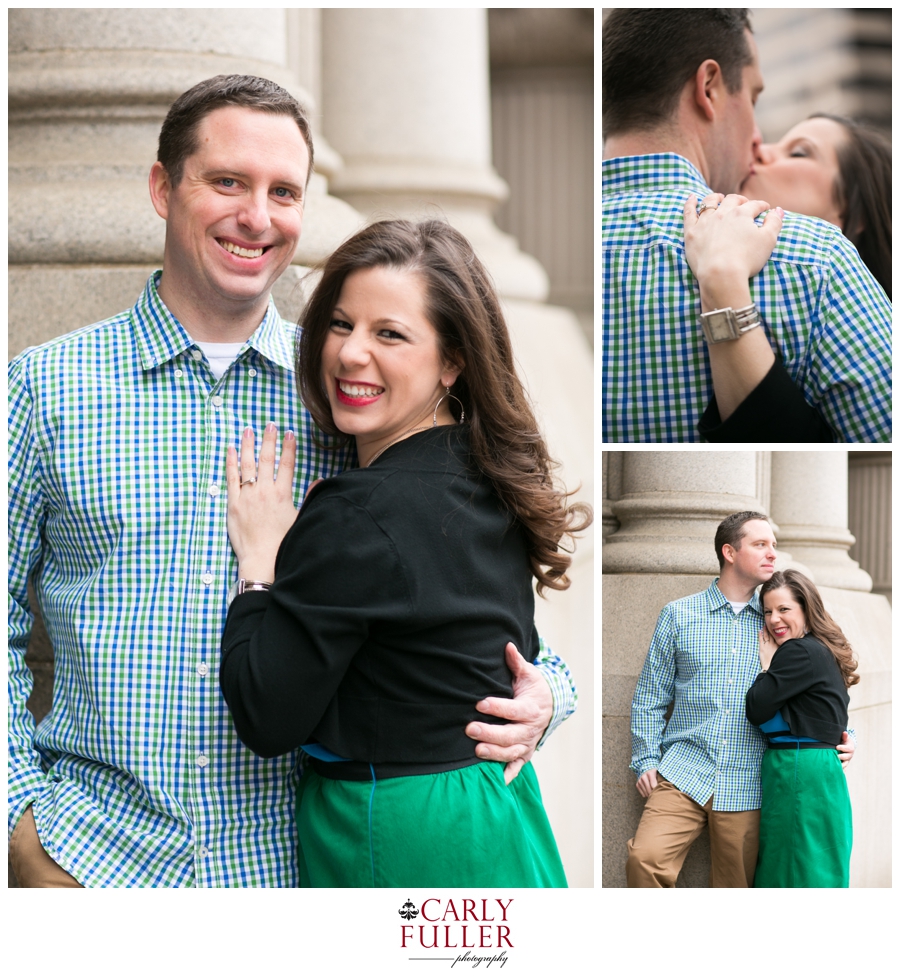 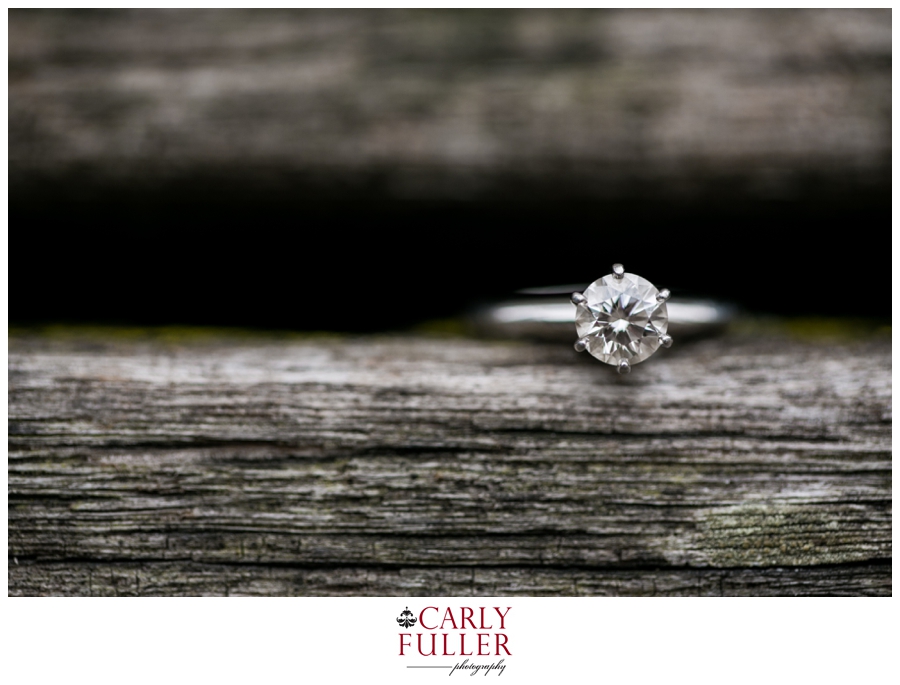 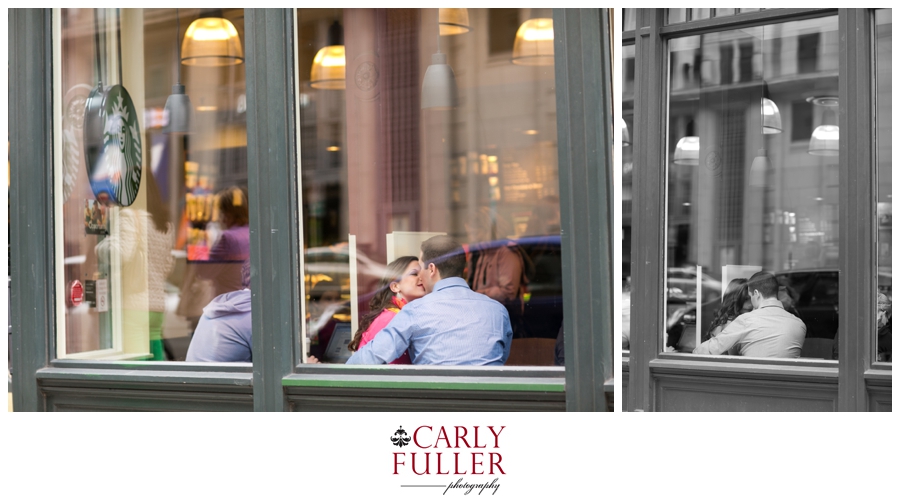 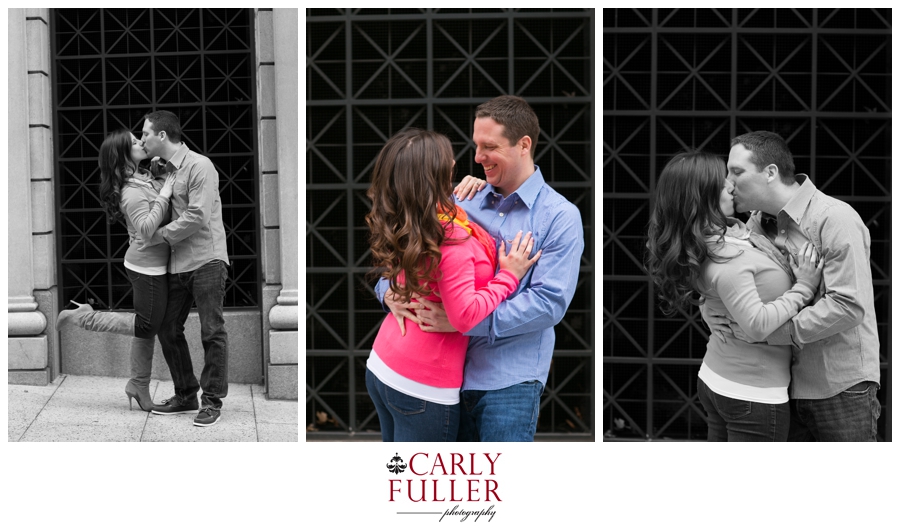 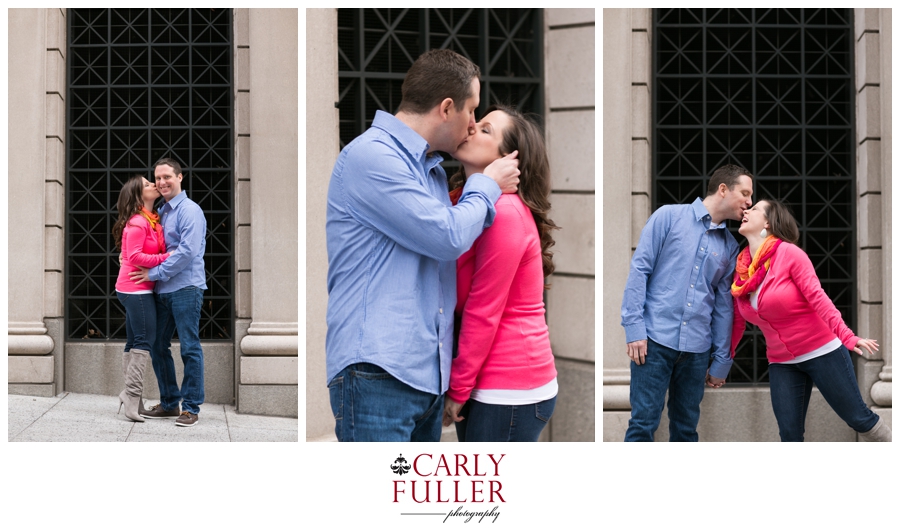 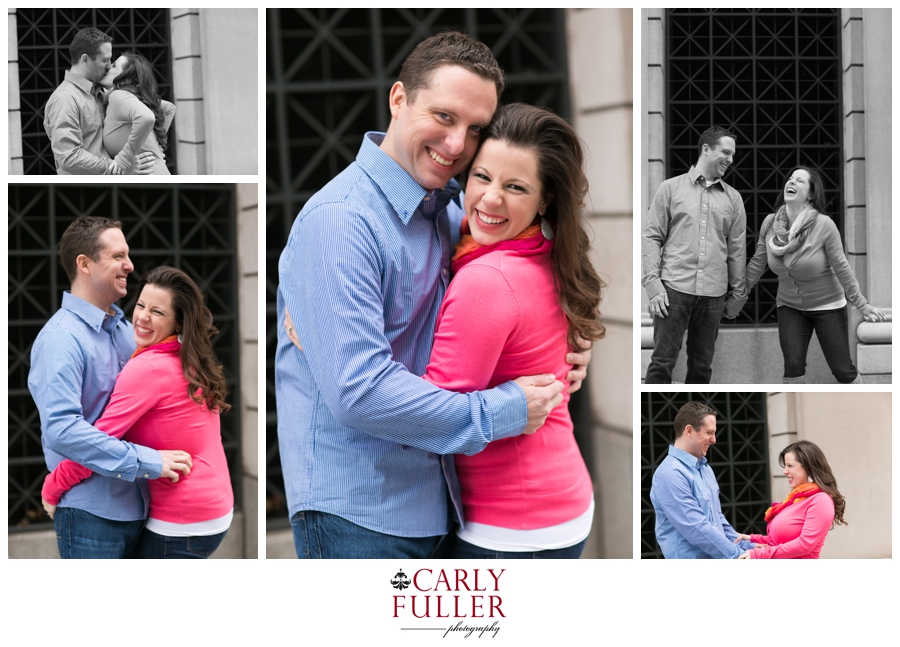 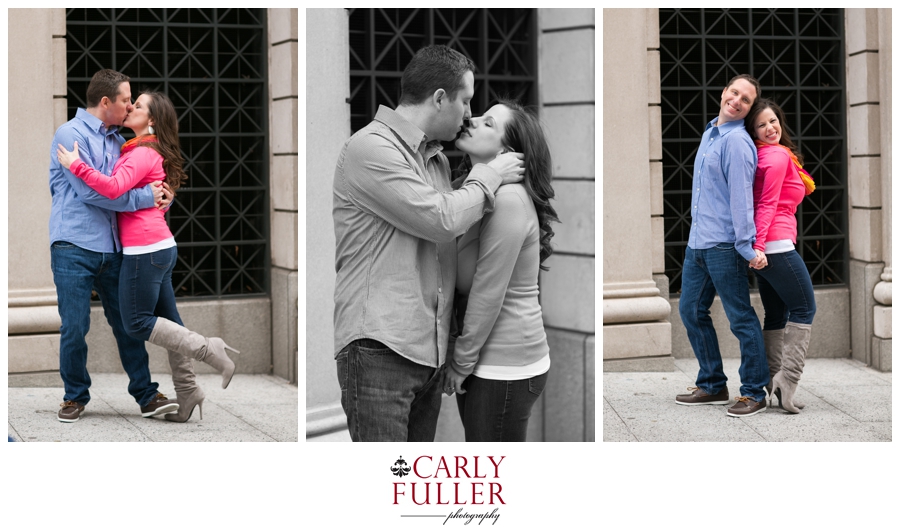 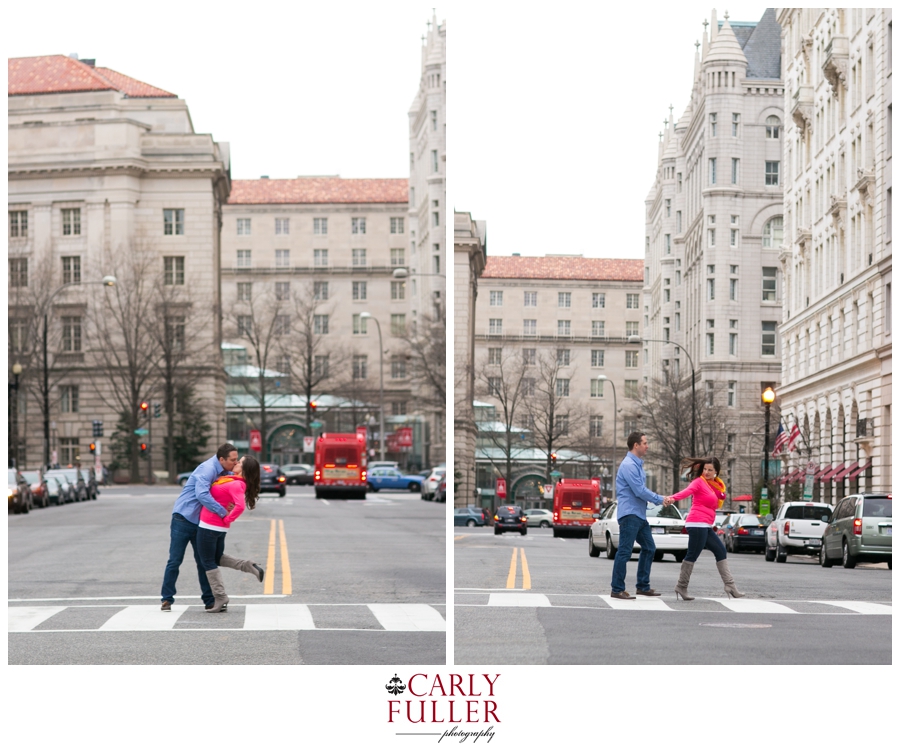 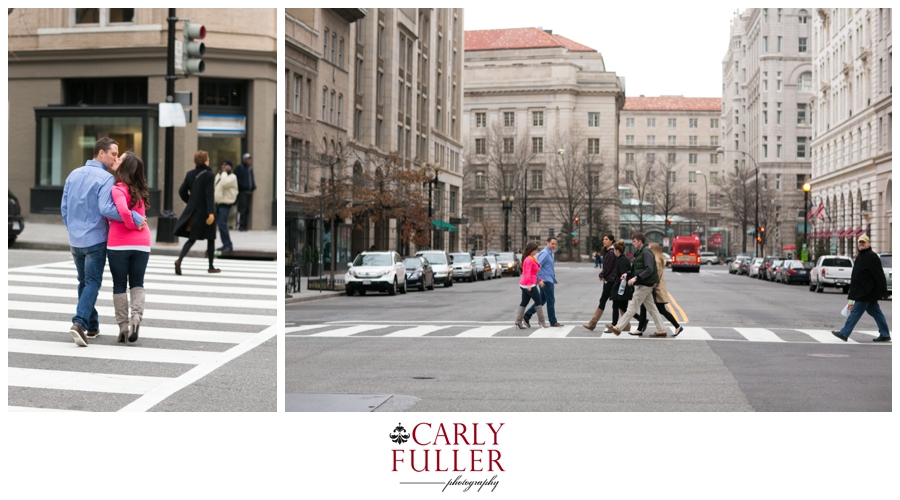 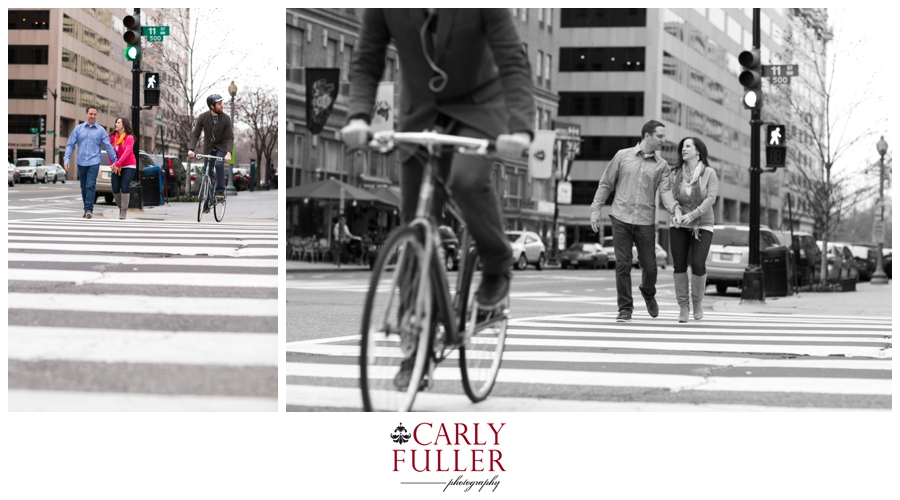 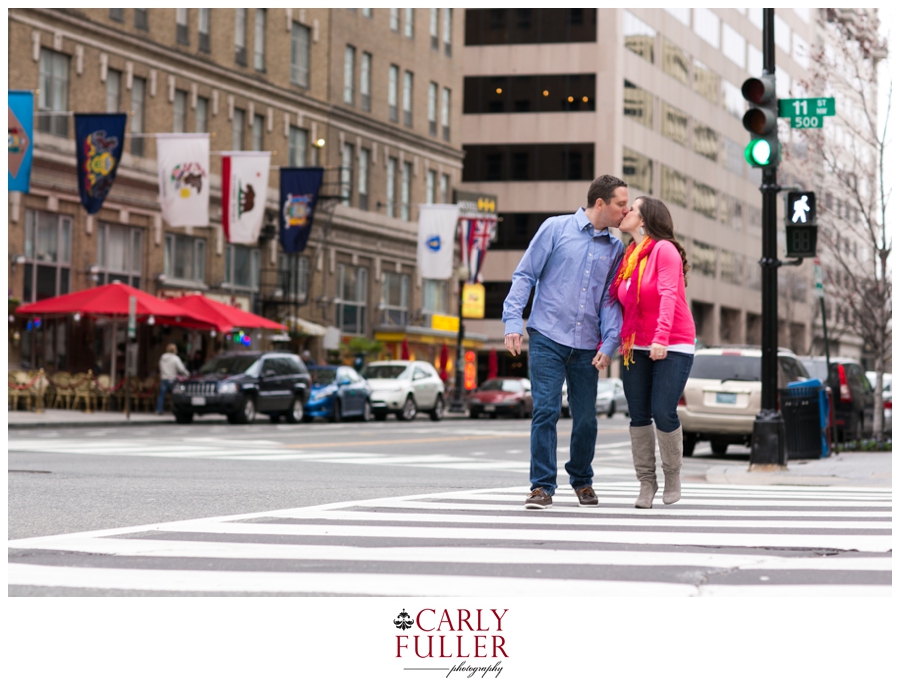